About a month had passed since the valedictory service. Some of the faces and memories are referred to in my last post was still fresh my head. I hadn’t quite began to miss things because it all sort of felt like an extended break. Somewhere within, I was convinced that things would resume at a certain point and the rhythm that I had grown accustomed to would return. This illusion was kept in place by the fact that we hadn’t moved from the house we had lived in while in Bristol. The place we were to take up during my curacy was due to be worked on – maintenance and repairs. What this meant was I would have to take my stuff for the ordination retreat with me all the way from Bristol and after the ceremony return to Bristol. This wasn’t particularly ideal: but that’s life. To be honest I was more daunted by the prospect of ordination than I was with the discomfort of travelling.

I suppose there is something about the pilgrims journey being the pilgrims journey. If one does not own the destination as their own, where does one draw determination and the hope to persevere – or even the courage to attempt the journey in the first place.

Close to 3 years prior, I set off from quiet house in West Sussex to make the three-hour trip across to Bristol to begin my theological education. I stress that ‘quiet house’ because it was empty. There was no one to share my anxiety and excitement; no one to encourage me; no one to pray for me – I had needed it badly. Then, and in this moment I am here reflecting on, it felt as though God clearly wanted me to understand my sense of calling as my own. In as much as there are so many people he had placed around me to nurture me and encourage me through the journey, it seemed important to him that I knew that it was my journey first. That it will be me that would be shaped, tested, carried, refilled, thirsty, bruised, strengthened, and approved. So when with the retreat beckoning I placed my bags in the boot of my Little VW, that sense of solitude – positive solitude – was one that I recognised. This journey was for me.

There is something about the M4 that’s both charming and frustrating. Over the time spent in Bristol I have had to make numerous trips to and from London. Both the night time and the daytime journeys always gave me time to reflect, time to dream – obviously not while asleep at the wheel, and time to ‘defragment the hard drive’. The morning  drive was east into the sunrise, the evening drive west into the sunset; and the night’s peppered by a cascade of headlights. One grows accustomed to the red of the rear lamps. (If you are doing the London to Bristol trip, the Membury services have a drive through Starbucks #BroTip). On some days you might be lucky and there are no roadworks slow you down. But on other days, most days are really, at some point you have to slow down to a creep because hundred or so drivers decided they wanted to have a look at what was going on the other side of the motorway. For the many trips I had taken, I had grown to know the different curves and distances between the junctions; and how many songs would get me to which point.

This journey was different. For some reason  It had a feeling of finality to it. Almost like the beginning of an end. This was more than just a ‘you will no longer live in Bristol’ kind of end. Or a ‘you will no longer be a student at Trinity’ kind of end. This was a ‘your life is about to change’ kind of end. A ‘brace yourself’ kind of excitement washed over me as I buckled in. I started the ignition as that kind of smile you smile when you see the lion in the zoo and recognise how small you are, washed across my face. Needless to say I was parked up and a few steps away from the train station in Chiswick when I realised that I didn’t even put the Radio on for the two hour road trip.

The headphones were in and the music soundtracks for the cascading scenes and faces as the train took me deeper into the big smoke. The same Waterloo station that I had frequented in my freelance days now took on a different sense of wonder. Light interrupted by rows of steel ushered me forward. I slowly walked past the National Theatre and the BFI keeping away from the river because I knew what awaited me. But with a sense of inevitability the buildings peeled away. I could see it across the water, that great survivor who had welcome me into her arms once before and now towered above all so she could do it again.

When Wordsworth talks about spots of time, I think it’s things like these that he refers to. The memory is etched, maybe seared in. I can almost count the contours on the stems of the trees that line the embankment, their broad leaves slowly swaying in the gentle breeze. In front of me the tourists with their big cameras trying to catch little scenes, little glimpses to take home with them. And then there are other joggers, pilgrims themselves; and those on benches unpacking their sandwiches. I must have fitted right in with my travel bag and cassock carrier.

Slowly, as I approached Millennium bridge, all other buildings began to shrink. The cathedral grew bigger with each step, and so did the tremor from within. I was hungry but knew I couldn’t eat. It was all made worse by the fact that I knew I was afraid, wanted to turn back but couldn’t: I just couldn’t. I should have bought the sugar coated peanuts from the vendor on the bridge. There were steps to ascend gradually as the paved path from the river to the courtyard opened up. I wished I had memorised a song of ascent: there was a song playing through the headphones that I can’t recall – in truth I wasn’t listening.

With one last look up the steps at those daunting West doors I turned left as had been instructed. By the entrance to the crypt a sentry stood.

“I’m here for the ordination retreat”. I almost whispered.

“Right this way Sir!“, the reply, with an arm extended toward the well lit hollow. 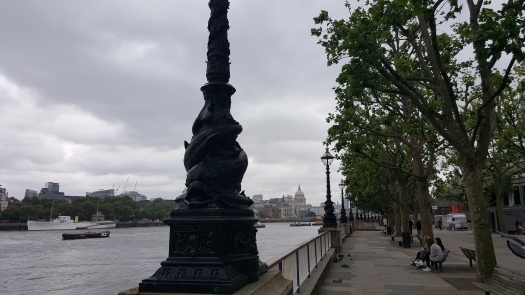